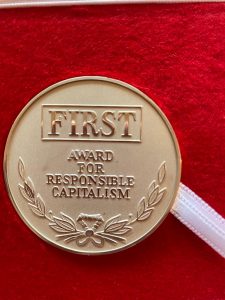 My Lords Ladies Gentlemen and Friends
I am deeply honoured and very grateful to be with you today. My thanks to the First Magazine and its Chairman Rupert Goodman and his colleagues.
My sincere thanks also go to the Right Honourable Lord Judge and the Judging Panel, who decided to give me this prestigious award
My whole life has been marked by major historical changes. I was born 3 years after the end of the 2nd World War in January 1948 in Czechoslovakia. One month later, in February 1948, Czechoslovakia became a communist state. I grew up in the dark ages of persecution and dictatorship of the communist regime.
In 1968 I took part in the Prague Spring, which was about socialism with a human face. After the invasion of Russian troops on the 21st August 1968 I decided that there is no future in the new regime. So in August 1969 I arrived in England. My life began as a homeless person living in Dunstable cemetery. I started my first job in Vauxhall Motors on the production line and had to learn the English language and a new way of life.
After the velvet revolution in 1989 I was allowed to return to Prague, after 20 years 4 months and 15 days of my exile.
Having experienced the alternative to capitalism I realised that society has to do everything to give people the belief that they can be in charge of their own destiny.
It was my colleagues, and some of them are here today, who participated in creating over 25,000 jobs in the construction industry, many thousands in IT and the games industry. Whilst using new methods of learning – Virtual Reality.
Many people through our scheme Rent to Buy have become property owners, whereas before they could never have afforded it. 18 years ago I realised that the environment would play a major role in society so I embarked on a project known as Aqua City which comprises of hotels, pools, sauna’s etc all powered by geothermal spring. Each day we save 27 tons of C02. We also built the first geothermal heated football stadium in the world which was frequented for many years by the Manchester United Academy where Marcus Rashford amongst many others began their career. To date 10 million people have visited Aqua City. Amongst distinguished guests was Her Majesty the Queen who visited in 2006 together with the Late Prince Philip who presided over the Environmental Conference for Eastern Europe. I started a farm which supplies responsibly sourced food, mainly organic, for vast areas of the Tatras Mountain
All these activities can be summed up by using innovative methods of learning – allowing people to achieve their dreams to become property owners instead of tenants, developing environmental resorts with responsible farming all powered by geothermal springs, all can be interpreted as responsible capitalism
Ladies and Gentlemen, we have all followed the latest news about the invasion of Ukraine – to me it brings the memories of the similar incident in 1968 – the fact that the world has changed a little. I would like to thank foremost this Great Country and to the British People who helped me to achieve what I am today.
My great thanks to all my colleagues and my wife Alena, without whom I would not have been able to fulfil my plans and dreams.
My Lords, Ladies, Gentlemen and Friends thank you very much for this honour. I am truly grateful and humbled – Thank you.